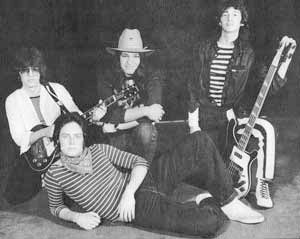 During the mid 1980s Third Wish was a popular Albuquerque favorite. This rock band was one of several that played the club scene with great success. Although fans in New Mexico were more familiar with the mid-eighties group, most may not know the history of the group and how it evolved over the years. At the core was lead singer Kenny Romero and guitarist Gary Cook. Both started the group in Santa Fe after Don Lovato (guitarist) introduced Gary to Kenny. That was in winter of 1980. From that point on the duo performed together for a couple of years until creating Wish which later became Third Wish. The following is a History of the band and its various members:


WISH
1981-1983 -This was the first band formed in Santa Fe. The group started as an original rock band but also incorporated various covers to complete a 2-hour stage show. They were the first rock band in Santa Fe to producer their own rock concerts at the Armory  For The Arts.
The first WISH band (1981) featured, (L to R): Gary Cook (guitar), Alan Medrano (drums), Andrew Gallegos (bass) and Kenny Romero (vocals/harmonica) in front center. 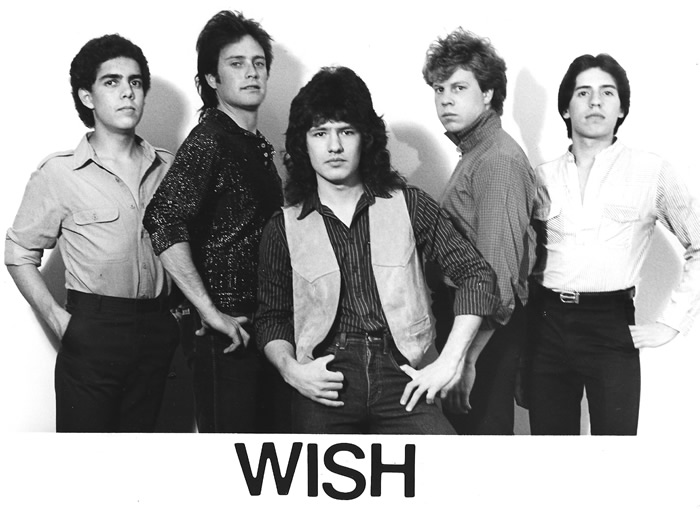 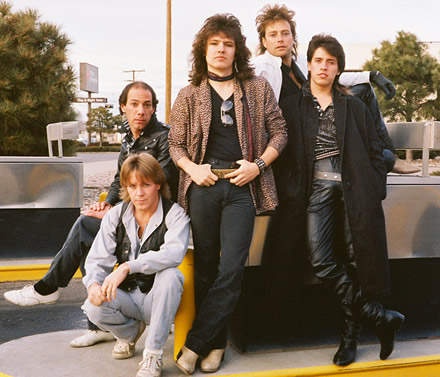 Around the autumn of 1985 Gary called in his old band mates… drummer Eddie Garcia and singer Kenny Romero (what a voice) from the earlier versions of Wish to play with us. We learned enough cover material that we could be booked in the local bars, and we started gigging around the end of 85 with a combo of cover tunes and our own non-descript songs with titles such as Urban Escape, Albert’s Complaint, Hold On, One in One and What’s The Matter With You. Of course the natural name for the band had to be Third Wish since three members of Wish were still there. Needless to say, we got a lot of funny looks from the dance floor and our agent, but the band sounded good and we were very well received. We were having a lot of fun on stage, and people seemed to like what we were doing (even if it was a little weird for the mid-80s) 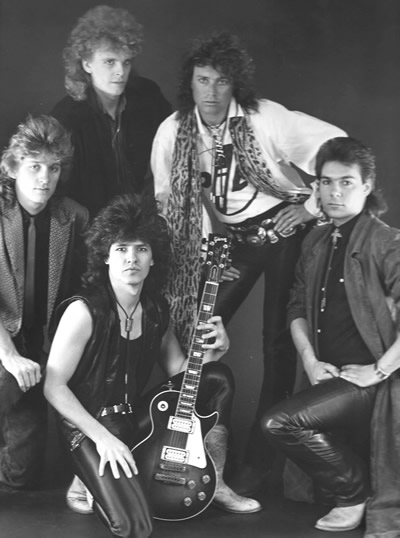 Jeff Donohoe, Bass and Vocals(February 2007) - As an update (my version) of the Wish / Third Wish story... I started writing songs with Gary Cook (Guitar/Vocals) and Brent Valentine (Keys) in the Spring and Summer of 1985. I had played with Brent in Face to Face in 83 and 84. Brent was one of the two keyboard players in Face to Face (very cool sound with two keyboard players). Gary had played with One of a Kind that had formed around the Face to Face drummer (Bob Gordon) and the other FTF keyboardist (Mike McDade). One of a Kind also featured John Herschkorn (vocals) and Bob Sweet/Jeff Johnson (bass).

I met Gary while he was playing with my old FTF band mates. When Gary left One of a Kind after doing the winning song (Time Again) for the Strohs/MCA Records Talent Search, he wanted to work on more original stuff, so we started collaborating in my kitchen on Garcia street. We were exploring styles that we had never really messed with before, and when Gary and I combined our writing with Brent’s very stylistic keyboard playing, we ended up with a sort of rock/jazz/fusion feel that was a lot different from the mainstream rock we had been used to playing. We started recording our sessions, sometimes with Bill Veitch on drums, and we laughed a lot (especially when Brent did his infamous chicken impersonation).


1985-1986 THIRD WISH w/ Jeff Donohoe and Brent Valentine - This was the most progressive of all the bands. Combining hard rock with jazz/fusion for a unique live show with great musicianship. The band recorded some original demos at Ricci Dustin's studio and in the kitchen, bathroom and shower at Jeff's house. Jeff has photos of Gary and all his gear crammed into the shower stall with a mic (an impromptu method of creating natural re-verb for the guitar solos). 1986 also saw the band's return to Club West in Santa Fe along with a totally different sound.

Gary Cook and Kenny Romero remained as core members throughout the history of the band. The group’s final performance was at Senior Buckets in Fall of 1987. 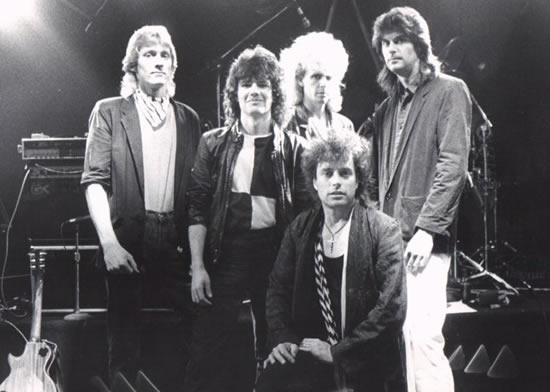 This photo provided by - Mark Simma

Jeff Donohoe, Bass and Vocals (February 2007) - Third Wish was the first of three bands ( * ) I played in with Eddie, who later went on to Vegas where he played with Tower of Power, Ricky Martin and spent several years playing with Clint Holmes, the headline act at Harrah's (I'm very proud of Eddie, he is an amazing drummer). Incidentally, Ricci Dustin, an Albuquerque Sound Tech (Showtech Inc) who worked with a lot of the bands on the New Mexico Band History Site, was Clint Holme's sound man until Clint left Vegas. Ricc is still the sound man at Harrah's as we speak.  Wes Wesson, (the Off The Wall Warehouse-Party-Doorman-Turned-Sound-Guy) who ran sound for Third Wish, went on to Nashville where he ran sound for Marty Stuart and toured with The  Charlie Daniels band for many years. Last I heard, Wes had settled in Austin.

Third Wish played well into 1987 (maybe 88). I played Bass and sang with Third Wish until July of 1986 when I was replaced by Thor Spangler and later Carlos Cordova. Brent Valentine also left in 86 and was replaced by Derek (Daaakkk) Hilland who now plays keyboards for Rick Springfield after several years in LA and on various world tours with Iron Butterfly and David Coverdale of Whitesnake. Third Wish was Derek's first real "Rock" gig, and he had to borrow money from his dad to buy equipment because he didn't have ANY when he joined the band! He was right out of high school and also had very little hair at the time…but boy did it grow. Derek and I later became roommates and played together in 87 and 88 in The Exchange with John Herschkorn, Bill Veitch, and Dave (Adonis) Thomas. Eddie also left Third Wish sometime in 87, and he was replaced by Mark Simma.

Gary Cook went to LA where he attended Groves School of Music, became the VG-8 expert for Roland Corp and headed up the Guitar Department for Yamaha for several years. Gary has worked with a diverse list of artists including Sting, Joni Mitchell, Clint Black, Neal Schon, Mike Elizondo, Scott Reeves, Greg Adams, Igor Len, Andrew Strong and a host of others. (Visit his site, listed at the end of this page).

All the guys f rom the various Albuquerque bands mentioned in this bio still play in some capacity or another. We've all remained on friendly terms, and over the years many of us have ended up playing together in various line ups. In January of 2006 I was fortunate enough to reconnect with Gary and we have played a few gigs together as a break from our other gigs (pretty fun and very nostalgic for both of us). Its really been amazing for me to watch these players evolve over the years, and I count myself very lucky to have some shared history with all of them. A history that I am now sharing with you and also with my son Dustin Vaughn who gets a big laugh out of all the crazy things his dad and his friends used to do. I still retain this one image of Kenny singing “Whats The Matter With You” at the Launch Site with a pair of his girlfriend’s pink panties on his head. Wild Times!” 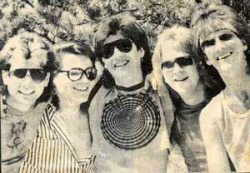 One of A Kind pictured (L to R):  John Herschkorn (vocals), Bob Gordon (drums), Gary Cook (guitar), Michael Mcdade (keyboards) and Bob Sweet (bass). When Gary left One of a Kind after doing the winning song (Time Again) for the Strohs/MCA Records Talent Search, he wanted to work on more original stuff, so we started collaborating in my kitchen on Garcia street. We were exploring styles that we had never really messed with before, and when Gary and I combined our writing with Brent’s very stylistic keyboard playing, we ended up with a sort of rock/jazz/fusion feel that was a lot different from the mainstream rock we had been used to playing. We started recording our sessions, sometimes with Bill Veitch on drums, and we laughed alot (especially when Brent did his infamous chicken impersonation).